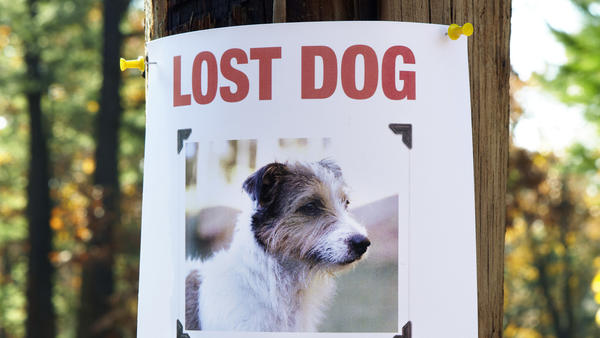 A recent investigation of Cook County’s Department of Animal and Rabies Control revealed the agency lacks a system for reuniting lost pets with their families. (Jeffrey Coolidge, The Image Bank)

Your best friend, Bowser, is missing.

You’ve plastered the neighborhood with fliers, posted his mug on Facebook, circled the block for hours while holding a can of Alpo out the car window. You’ve offered up a prayer to St. Francis of Assisi, patron saint of animals, and cursed yourself for not registering that microchip. Now what?

It’s time to make the rounds at all the local shelters, come up empty, and repeat. If Bowser’s been picked up and you don’t find him quickly, he could be offered for adoption or, gulp, euthanized.

Don’t expect much help from Cook County’s Department of Animal and Rabies Control. It doesn’t operate a shelter and doesn’t consider reuniting lost pets with their families a big part of its mission. In a report last month, the county’s inspector general made a good case that it ought to, and we agree. Especially since the IG’s six-month review left us shaking our heads at what the department actually does.

Animal Control is about rabies, mostly. It gets most of its funding from the sale of rabies tags — and spends much of that money to pay employees to type the rabies tag data into a very old computer system.

There are 22 full-time employees, and 13 of them spend most of their time processing tags, often earning comp time for working during their lunch hours, according to the IG’s report.

Most of the data is submitted by clinics, shelters, veterinarians and rescue groups that perform the actual rabies vaccinations, but Animal Control’s system is so dated that the information can’t be uploaded easily, if at all. So staffers do it by hand. If this reminds you of the Cook County clerk of the circuit court office, join the club.

The IG recommends a web-based system so veterinarians and others can input the data themselves, freeing up resources for more meaningful services (like helping you find Bowser).

The office is closed nights, weekends and holidays, and the IG’s report notes that law enforcement agencies throughout the county complain that they can’t access rabies data or find an animal control officer except during banking hours.

There are six employees who patrol the unincorporated area for strays. Their workday includes time spent commuting to and from work in their take-home government vehicles. For one employee, that’s three hours a day. If heavy traffic means their door-to-door workday lasts longer than eight hours, they get comp time.

What do they do in between? The report doesn’t say, exactly, but it sounds rather aimless. The IG recommends more supervision, along with a patrol strategy based on analytics, “not left to the discretion and judgment” of drivers. It also says work schedules “should be adjusted for improved coverage and reflective of the needs of the county.”

The big takeaway from the IG’s report, though, was the notion that Animal Control should take responsibility for unwinding the frustrating “maze” that prevents lost pets in Cook County from finding their way home.

Animal Control contracts with a shelter in Chicago Ridge to take in animals impounded by the county. Chicago sends its strays to a shelter in Little Village. A few suburbs have their own facilities. Then there are more than a dozen nonprofit shelters and rescue groups. Together, they take in 50,000 animals a year. Bowser could end up at any one of them.

The American Society for the Prevention of Cruelty to Animals says fewer than 30 percent of dogs that come in as strays — and fewer than 5 percent of cats — are claimed by an owner. Those odds are likely worse in Cook County, because owners don’t know where to start. It makes sense for them to start with Animal Control, the IG says.

The agency’s website should provide a road map for the search, the report says, with a list of all the shelters and rescue groups, including phone numbers and Internet links. It could also include a registry that can be accessed by the public to upload posts and photos about lost and found pets, and a database of microchip registrations and rabies tag numbers to help shelters and local police identify animals they pick up.

That would be a real service to the people whose rabies tag fees fund Animal Control, and the costs would be more than covered if the agency adopted the efficiencies recommended in the IG’s report. That would be a tail-wagging outcome for everyone. Especially Bowser.